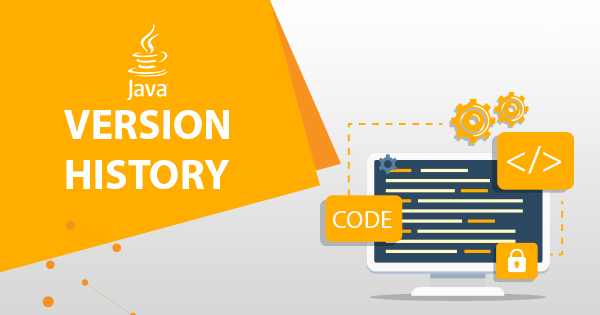 Java is one of the most popular programming languages in recent times. The extensive Java version history shows how Java sustains its popularity over the last many years. Java is an object-oriented programming language with similar features like C++, albeit with simpler and highly advanced features. One of the notable highlights of Java is that it is available for free to access and could run on all platforms.

The basic foundations of Java are evident in all java versions, and you can find concurrency and independency in all new versions. Concurrency implies the facility for executing various statements without the need for sequential execution. Independency is evident in compliance with the logic of “Write once, run anywhere” in Java. Therefore, the compiled code on Java could run on all platforms supporting Java.

Furthermore, in addition to being an object-oriented programming language, Java is also class-based. The applications of Java in a wide range of industries is clear proof of the effectiveness of Java. Therefore, discussions on Java have constantly been referring to the need for reflection on the various versions of Java.

As noted above, Java is an object-oriented programming language, and the first roots of Java became visible in the early 1900s. The team of James Gosling, Mike Sheridan, and Patrick Naughton, alongside other members known as the “Green Team” at Sun Microsystems, are responsible for the foundation of Java. The basic tenet of Java focuses on establishing a difference with other programming languages.

All the java versions are ideal for compilation to a bytecode that is run by a Java Virtual Machine (JVM). This implies a difference in Java from conventional programming languages that compile to machine code or ensure interpretation from source code at runtime. Now, you could find that the latest java versions download would provide you with the basic benefits that are the primary objectives for creating Java language.

The five basic goals define the general features of Java as we know it today. First of all, Java implements the object-oriented programming model. The next goal implies the need to allow the execution of a program on multiple operating systems. The third primary objective refers to the facility of in-built support for using computer networks. The next important objective for designing Java is evident in the need for secure execution of code from remote sources.

Java programmers could easily achieve remote code execution and networking support by using extensions such as Internet Communications Engine, OSGi, or CORBA. Finally, the last objective for designing Java is primarily reflective of the need for ease of use. The final objective is feasible in Java with the combination of favorable features from other object-oriented programming languages.

Have any doubt if Java certification is worth getting? Go through the top reasons to get a Java Certification and clear your doubts.

Decoding the version history for Java

Coming back to the Java Version history, the first public implementation of Java in 1996 is the starting point. Before that, in 1995, the Alpha and Beta versions of Java were the first releases, albeit with higher instability of APIs. Over the years, the Sun brought forward many implementations without any charges. The major source of revenue for Sun is the Java Enterprise System (JES).

However, the new implementations associate with different names and version titles. A closer reflection on the history of all java versions download could provide a summarized impression of java’s history. The first thing for notice of readers is that the versions 1.0 and 1.1 are known as Java Development Kits (JDK). In the case of versions, 1.2 to 1.4, the accepted terminology for the platform is Java 2 Standard Edition (J2SE).

For example, version 1.5 and version 5.0 are the same things, albeit with different version names. The release frequency of Java latest version also serves as a crucial aspect in the version history of Java. Before the Java SE 7, all major version releases had an interval of 2 years between them. However, the Java SE 7 release took a massive gap of five years. Then, the Java SE 8 public release did not happen until three more years after the launch of Java SE 7.

The subsequent version, i.e., JDK 9, did not arrive until more than three years of the launch of Java SE 8. However, Java has now brought a new release cycle that implies releasing the latest version of Java at an interval of 6 months. This rule is applicable since Java SE 10 with Java 13 being the latest in line after its general availability on September 17, 2019.

Furthermore, the upcoming Java 14 is associated presently with an Early Access Build and is most likely to go public in March 2020. Another unique detail about the version history in Java is the termination of free public updates for the existing version with the launch of JDK latest version. Also, it is imperative to note the availability of long-term support with different versions until now. So, now let us focus on the various highlights of the notable versions that have been integral parts of Java’s history.

The first version of Java was JDK 1.0, which is known for providing the first stable release version of Java. The JDK 1.0.2 also holds the recognition of the first stable JDK version. The codename of this entry in the Java version history is Oak. In the case of JDK 1.0.1, the use of private and protected keywords together could help in providing a unique type of protection by restriction of methods and variables to the subclasses of a particular class. JDK 1.0.2 does not have this functionality.

JDK 1.1 was the next java latest version that came in February 1997. The addition of many new features to JDK 1.1 brought forward a new tide of changes in the Java landscape. The notable additions in JDK 1.1 included the concept of Inner Class, JDBC, RMI, and JavaBeans. JDK 1.1 had internationalization and Unicode support through Taligent and also went through a radical transformation of the AWT event model.

JDK 1.1 also supported reflection, although providing support only for introspection without any possibility for modification at runtime. The most prominent addition to Java wit JDK 1.1 was the Just in Time (JIT) compiler for Microsoft Windows platforms by Symantec.

The next entry in Java version history is J2SE 1.2 that came forward on December 8, 1998, with the codename “Playground.” The J2SE 1.2 is a suitable term for distinguishing the base platform from Java 2 Platform, Micro Edition (J2ME), and Java 2 Platform, Enterprise Edition (J2EE). The significance of this Java release is evident in the fact that it increased the size of the Java platform by three times with 1520 classes in 59 packages.

The notable additions in this version include the Collections framework and Java plug-in. Furthermore, J2SE 1.2 also provided an IDL implementation for CORBA interoperability in the form of Java IDL. Most important of all, the JVM integrated with a JIT compiler was a first in this Java release. Another important feature in this latest version of Java was the integration of Swing graphical API into the core classes.

The following addition in the Java version history was J2SE 1.3 that came forward in May 2000. The codename for this new Java release was “Kestrel,” and it brought many new features. First of all, the primary highlights are HotSpot JVM, JavaSound, Synthetic proxy classes, and Java Platform Debugger Architecture (JPDA). Furthermore, this new Java release includes the Java Naming and Directory Interface (JNDI). You can also find modifications in the RMI for supporting optional compatibility with CORBA.

The next addition in Java version history is the J2SE 1.4 that was publicly available on February 6, 2002. It is the first Java Platform with a release under the Java Community Process. The additions in this Java version include improved libraries, IPv6 support, integrated XML parser, and XSLT processor. Another significant addition is the facility of exception chaining, which helps an exception in encapsulating the original lower-level exception.

Logging API, security and cryptography extensions such as JCE, JAAS, and JSSE, integrated into J2SE 1.4, are some of its unique features. The support for Perl’s regular expressions is also one of its notable features. Interestingly, this version codenamed as “Merlin” also included an image I/O API for reading and writing images in JPEG and PNG formats.

J2SE 5.0 followed J2SE 1.4 in the Java version history and also got recognition by the codename “Tiger.” Java 5 is the last Java release with support for the Microsoft Windows 9x lineup. The Windows 9x lineup includes Windows 95, Windows 98, and Windows ME. Windows Vista was the last officially supported Windows version with J2SE 5.

The new language features in J2SE 5.0 include enumerations, static imports, and annotations, or use metadata. The other crucial features include autoboxing or unboxing, compile-time safety for collections, and excluding the need for many typecasts. The facility of better semantics of execution in the case of multi-threaded Java programs is a notable advantage in J2SE 5.0.

The advancements in standard libraries also indicate further improvement in its functionality. For example, the introduction of the scanner class to parse data from different input streams and buffers. This version also includes the feature of automatic stub generation for RMI objects.

The new JDK latest version was Java SE 6, and the release date is December 11, 2005. The codename of this version was “Mustang.” The addition of new features in this version include the scripting language support and better web service support. Also, it has JDBC 4.0 support and a generic API for better integration with scripting languages. Java SE 6 excludes support for older Windows 9x versions. It uses a Java Compiler API for programmatic invocation of a Java Compiler.

The next addition to Java version history was Java SE 7, launched in July 2011 with the codename “Dolphin.” The additions in this version include JVM support for dynamic languages, the addition of strings in switch, and compressed 64-bits pointer. The other features include binary integer literals, automatic resource management in try-statement, and permitted underscores in numeric literals. Java SE 7 also provides a better type interface to develop generic instance along with Java Deployment rulesets.

Java SE 8 with the codename “Spider” came in March 2014 and included some features proposed for Java SE 7. The features in this version include annotation of Java types, repeating annotations, language-level support for Lambda expressions. It also includes a feature for the removal of permanent generation. The foremost highlight of Java SE 8 is that it is the first Long-Term Support (LTS) release of Java.

Java SE 9 came forward in September 2017. The features include the Modularization of JDK according to Project Jigsaw, Money and Currency API, Java Linker, and extensive integration with JavaFX. Java SE 10 was the next in line with many new features. Some of them are time-based release versioning, root certification, local-variable type inference, and heap allocation on alternative memory devices.

The six-month release cycle is known as a prominent determinant of the Java version history. The development of different new features and smaller enhancements, along with opportunities for bug fixes, continue to widen the Java landscape. A thorough overview of the different versions of Java could improve our understanding of new features added in every new version.

The next important factor that is important in this case is the necessity for programmers to stay updated with recent improvements in Java. The different new features of the latest releases of Java, as well as the support details from the version history, can help in making the most of Java.

Preparing for Oracle Java certification, check out our Java Certification Training Courses and give your preparation a new edge!