Whizlabs Blog
Blog Java What are the New Features in Java 13? 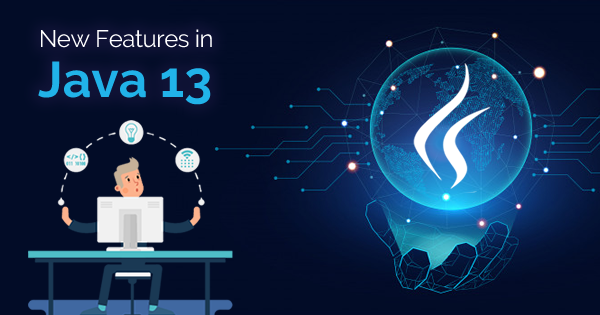 Java is one of the widely used programming languages in the world. The applications of Java are suitable for the distributed environment on the internet. With the recently launched version of Java i.e. Java 13, there is a lot of speculation surrounding Java 13 new features. The use of Java for creating complete applications to run on a single computer or through distribution among servers in a network is evident. However, the constant evolution of Java has seen many additions of classes and packages to the standard Java library.

According to the chief architect of the Java Platform, Mark Reinhold, the new release cycle is of 6 months. The 6-month release cycle involves a new feature release every 6 months. Therefore, when Java 13 release news came out, many enthusiasts tried to find new features in Java 13. So, what’s new in Java 13? The following discussion is an ideal source of information for readers to know everything new in Java 13.

Aspired to become a Certified Java professional? Check out our Java certifications training courses and start your certification preparation!

Java 11 new features must have caught everyone’s attention, especially considering the fact that it is the second long-term support (LTS) release. Similarly, thoughts about Java 13 new features might be developing with some sort of confusion regarding long-term support. The Java 13 release date on 17th September 2019 shows that the public updates for Java 13 would end in March 2020. However, the primary focus of our discussion is on the new features in Java 13.

In addition, we shall also try to explore additional information about features and options that have been removed or reduced. Furthermore, insights into the evident issues in Java 13 also form an important part of this discussion.

The Java Development Kit (JDK) 13 is the latest variant of standard Java that is provided as a production release. The Java 13 release date on 17th September 2019 brought a slew of many features that were in the proposals. The prominent highlights among Java 13 new features include improvements in the Z Garbage Collector and application class-data sharing. Furthermore, the preview of text blocks and switch expressions also show an improvement over Java 12 new features. Let us take note of the important new features in JDK 13 as follows.

The concern of adding text blocks in the preview phase is the foremost entrant among new Java 13 features. The text-block is a multi-line string literal suitable for the objective of avoiding the need for excessive escape sequences. Text block is ideal for automatic formatting of a string with proper predictability and better control over the format for developers. The addition of text blocks in Java 13 is the product of various objectives. The first goal behind the new feature is the simplification of writing Java programs.

The simpler writing for Java programs is possible through the easier expression of strings across various lines of source code. The vital concern in the case of this objective is to avoid escape sequences for general cases. The use of text blocks as Java 13 new features is also ideal for improving the readability of strings. The textbooks can help in enhancing the readability of strings in programs that represent code scripted in non-Java languages.

Java blogs are a good source that helps to stay updated about Java news and versions. If you want to keep yourself updated, check out this list of best Java blogs and subscribe to them.

The third prominent use of text blocks in the new Java 13 features is the support for migration from string literals. According to the revised stipulation, any new construct could express the same set of strings as a string literal and interpret the same escape sequences. In addition, it also ensures manipulation like a string literal.

The reimplementation of legacy socket API is also a prominent addition among Java 13 new features. This addition is a perfect replacement for underlying implementations in use by java.net.ServerSocket and net. Socket APIs. The advantage, in this case, is the simplicity and sophistication in implementation with ease of debugging and maintenance. This implementation is suitable for easily adapting to working with user-mode threads known as fibers.

The notion of fibers is presently under discussion in the Project Loom. The legacy APIs are known for being in existence since JDK 1.0 and involve a mix of legacy C and Java code. The primary issue with the mix of legacy code arises in the form of difficulty in debugging and maintenance. In addition, the legacy implementation could also present various issues such as the native state structure for supporting asynchronous closing. As a result, you can encounter reliability and porting issues alongside the need for resolving concurrency issues.

The primary objective of this improvement is the extension of ‘Switch’ for using it as an expression or a statement. As a result, you can use the traditional ‘case…:’ Labels with fall through or the new ‘case…->” labels without any fall-through. The new statement for obtaining a value from a ‘Switch’ expression is also a vital addition among new features of Java 13. The best benefits from this entry among Java 13 new features are simpler coding and effective preparation for pattern matching.

Another notable improvement that you must have come across in Java 11 new features refers to Z Garbage Collector (ZGC). The improvements in ZGC for Java 13 new features indicate the functionality of returning unused memory to the operating system. The ZGC is known for its higher scalability and low latency for a collector. However, despite the improvements in ZGC for Java 12 new features, the garbage collector does not return unused memory back to the OS. This can create issues for the stagnation of memory due to non-use for a longer period of time.

The improvement in JDK 13 download is not suitable in specific applications and environments. The environments under concern in such cases refer to the involvement of memory footprint as an issue. Such type of environments includes applications staying idle for a long time alongside sharing and competition for resources with other applications.

Extending application class-data sharing (AppCDS) for enabling dynamic archiving classes when the application execution ends. The archived classes would involve a loaded application, and you do not find any library classes in the default base-layer CDS archive. The proposal for this improvement is now in the targeted stage for improving the usability of AppCDS. The proposal in the targeted stage is ideal for reducing the necessity for users to execute trial runs in creating a class list for each application.

However, alongside the different Java 13 new features, you can also find various exclusions in this new version. The various features that you don’t find in Java 13 include the following.

The Java landscape is constantly evolving, and now you can get the free link for JDK 13 download. The different evolutions in Java would bring forward certain improvements, such as objects without identity like value types. The possible improvements in the future would include 64-bit addressable arrays for supporting large datasets. As discussed here, raw string literals could also make an entry after they went away from the JDK 12.

The opensource movement would slowly build traction, and the 6-month release cycle of Java is the new trend. The 6-month release cycle can bring forward faster improvements in the functionality of Java. So, let us look forward to Java 14 new features to make a mark soon. It’s not like that the new versions make the older ones obsolete. Java 8 and Java 11 are the versions that are in huge demand for beginners as well as experienced Java professionals for their certifications.

So if you are looking to validate your Java knowledge and experience, prepare with our Oracle Java certifications training courses and get ahead to become a Certified Java professional.