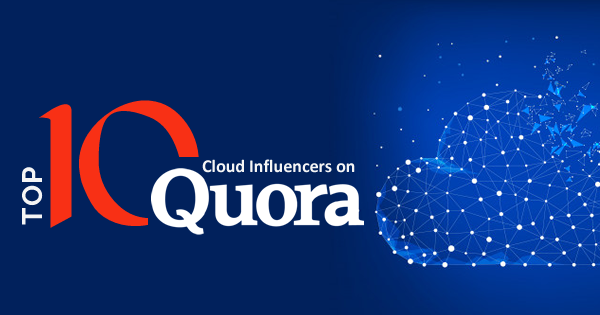 There are a number of cloud experts on Quora whom you can follow and request to answer your questions. Let’s check out the list of top cloud influencers on Quora.

Cloud computing has brought massive and revolutionary changes in the IT world recently. The transfer of legacy systems, applications, and business processes to the cloud is an ideal approach to reduce costs. Also, the outcomes of efficiency are improved substantially with cloud computing.

The first position among cloud experts on Quora is ideally fit for Werner Vogels. With an active profile on Quora, Vogels interacts with his followers from time to time. Vogels is renowned for his involvement in the development of Amazon Web Services. The contributions of Vogels to the world of cloud computing are seen now with AWS as the market leader. He also has many mentions in many lists of AWS influencers on Quora. Presently, Vogels is the Chief Technology Officer and Vice President at Amazon.

A prominent name among cloud influencers on Quora is Michael Hausenblas. He serves as a cloud developer advocate at Amazon Web Services. He also has written many books on Kubernetes which are quite popular among developers. Therefore, Michael surely deserves a spot among top cloud influencers of 2019 on Quora.

Lakshmi-Narasimhan-Parthasarathy is another notable mention among Azure influencers on Quora. He is the co-founder of ShapeBlock. He has years of experience in Kubernetes cluster. The expertise of Lakshmi Narasimhan in Microsoft Azure and cloud computing is solid proof of his capabilities as an influencer. Furthermore, his expertise in cloud platform has made him an addition to cloud influencers on Quora.

Bernard Golden is also one of the reputed cloud influencers on Quora. Presently, he is serving as the vice president of cloud strategy at Capital One. He is also the CEO of Navica. The proficiency of Bernard as cloud computing Quora influencers also has the support of his technological vision. The views of Bernard alongside his speeches, training courses, and books on his blog are very popular.

Also check our previous blog Top 20 Cloud Influencers and don’t forget to follow them on Twitter and stay tuned for the latest news and updates of the cloud computing world!

Adrian Cockcroft is the second mention among cloud experts on Quora in this discussion. He has served as a Netflix Cloud Architect. He is the major force behind Netflix’s cloud infrastructure. The regular interaction of Adrian with his followers makes him one of the best cloud influencers on Quora. Following his stint at Netflix, he was responsible for the cloud migration journey of Battery Ventures. Presently, he has around 1326 followers on Quora.

Krishna Srinivasan is another addition among the Cloud influencers on Quora. He is one of the cloud computing thought leaders who keep on sharing his knowledge and experience of the AWS platform on Quora. He is the CEO of Whizlabs, an online certification training provider, well-known for the cloud certifications training. Krishna Srinivasan’s knowledge and expertise in AWS cloud is a valid reason for including him as cloud influencers on Quora.

When Jay saw that there was no effective solution to the issues of cloud spend; he started ParkMyCloud. Before that he worked more than ten years with IBM Tivoli and Micromuse. The experience and skill of Jay Chapel with different cloud platforms makes him reliable for finding answers to difficult cloud platform questions.

Randy Bias enjoys a formidable reputation among AWS experts and influencers in the present time. Randy interacts with his followers on various social media platforms. The wide range of skills of Randy in cloud computing took him to his current status. He is currently serving as the CEO of CloudScaling, and he also writes for their blog regularly. You can always depend on Randy for solving your questions regarding AWS. The sheer skills of Randy make him the best cloud influencer on Quora.

9. Ian Moyse – Board Member at Eurocloud

Ian Moyse is the next addition to the list of cloud influencers on Quora. Ian Moyse is known for his thought leadership in cloud computing, IoT as well as SaaS. Ian interacts with his followers through his blog titled “Cloud Matters.” Furthermore, he also posts guest blogs on renowned platforms such as Oracle, Equinix, Cloudtech, Miller Heiman, etc. Ian Moyse is presently working as the sales director for Natterbox, a cloud-based telephony service.

Duncan Epping is another one of the best cloud influencers on Quora. Duncan is highly popular for his expertise in storage and availability as well as virtualization and the cloud. With five patents in the storage and availability domain, Duncan stands out as one of the top cloud influencers on Quora. One of the notable highlights about Duncan is that he is the first design expert with VMware certification.

Thought leaders on Quora can interact personally with businesses and individuals for providing credible responses to queries. The list of cloud computing influencers on platforms like Quora is not limited only to ten. You can find many other thought leaders on cloud computing on Quora. However, the discussion provided the names of some of the best in the business, and their credentials don’t lie.

So, if you’re aspired to build a successful career in cloud computing, just follow these influential people and get answers to your queries from them. You can also check our cloud computing training courses, that are prepared by industry experts to help you get certified and become a recognized cloud professional.

What is the difference between Hands-on Labs and Sandbox?