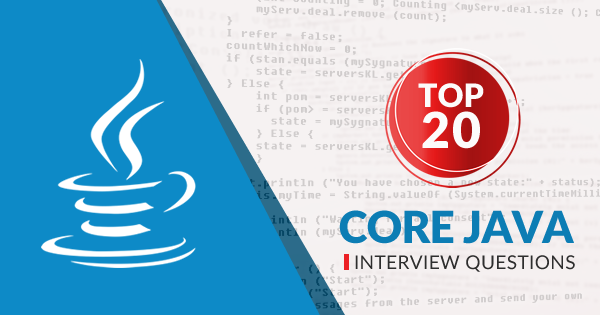 Java was created by the Sun Microsystems in 1995 as the open-source and platform-independent programming language. Later, Oracle acquired Java from the Sun Microsystems and since then it has gained the prized possession. Oracle worked rigorously on the Java security features and made it more versatile and portable, so it can run on any operating system. Java quickly took over the software industry and became the game-changing technology for various sectors and devices.

Java is used by 90% of the fortune 500 companies. It is used by various sectors such as government, healthcare, education, defense, insurance, manufacturing, tech and many more. Java is used for providing the backend architecture for the companies and its scalability and speed over the various other tools is recommendable. Java is considered to be the omnipresent programming language as it has run on over 3 billion machines around the world which is more than any other language.

This article covers core java interview questions which are prepared in a way that gives a clear and easy understanding of basic and advanced concepts.

Answer: Java is a robust, secure and high-level programming language which was designed by James Gosling in 1995. Java is concurrent, class-based, and the collection of objects. It works on the principle of write once and use anywhere that means once it compiles, it can be run on any platform without the requirement of recompilation. Java is also used for developing many applications, websites, and games.

2. What is Java Virtual Machine and is it platform-independent?

Answer: Java Virtual Machine is the heart and soul of the Java programming language. JVM is a virtual machine that acts as a real runtime engine that invokes the main method present in the java program. It is responsible for converting source code into bytecode which is machine-readable. Initially, JVM was built for Java but now, it supports many other languages, known as JVM languages, and interprets the programs written in those languages.

3. What is the key difference between JDK, JVM, and JRE?

Answer: The key difference between JDK, JVM, and JRE can be given as –

JDK stands for Java Development Kit. For the development of any applications, we have to go through two phases:

In the first phase, we write code and in the second phase, we compile and run the code. For all this to happen, we need an environment which is provided by the JDK.

JRE stands for Java Runtime Environment. It is a set of tools which are used for developing the applications and it is used to provide a runtime environment. JRE is an implementation of JDK and it contains different libraries and other files which are used by the JDK at runtime.

JVM stands for Java Virtual Machine and it is responsible for running Java program in JRE. It is an interpreter as it runs code line by line. It is also responsible for converting the bytecode into native code which is machine readable.

4. Why Java is not purely Object Oriented language?

5. Why in Java, the main method is static?

Answer: The main method is static because if it is not there, there will be a lot of confusion about which constructor to call. Let’s take an example of it:

JVM will get confused, should it call the new DemoJava (int)? What value for X has to pass it for? If not then should it go for the DemoJava class without running any of the constructor methods? Sometimes there will be the case in which initialization is not done and JVM have to check it in every method. For making it all sense for JVM the instantiation of a class should be at the entry point and that’s why main is static.

6. What is overloading and overriding in Java?

Answer: The concept of overloading and overriding can be explained as below:

7. Why is multiple inheritance not supported by Java?

Answer: this keyword is present in the instance method or a constructor and used to reference the current object. The most important work is to make sure that object variables are being used, not the local variables with the same name.

With this keyword, we can also invoke a constructor from other constructors

9. Can we overload the main method?

Answer: Yes, we can have multiple methods with the name “main” in a single class. But when we execute the program, Java Runtime Environment searches the program with the main method that has the following syntax:

10. What is the Java Package and which is the default Java package?

Java.lang package is the default package which is imported without any call and we can use any class from this package explicitly.

11. What is an abstract class?

Answer: Abstract classes are the classes in Java which are used to create a class with some default method implementation for the subclasses. An abstract class can have different methods but without containing the body and it can have methods with implementations also.

Follow these top 20 Java Influencers and experience the difference in your knowledge.

13. What is Deadlock? How will you check and avoid deadlock situation?

Answer: Deadlock is a programming phenomenon where two or more threads are blocked forever. This situation arises with at least two threads and two or more resources.

To check a deadlock situation, we focus on the Java thread dump of the application where we search for the threads which are in blocked state and its resources are waiting to lock, with the unique ID every thread have we can find the thread which is holding the object.

The best way to avoid is deadlock by never using nested locks, used locks only when it required and not using waiting indefinitely are some of the common ways to avoid the deadlock situation.

14. What are the benefits of multi-threaded programming?

15. What is the Exception in Java and how these are handled?

Answer: An exception is an error event which happens during the execution of a program and causes a disturbance in the normal flow. An exception arises due to a different kind of circumstances which are a hardware failure, wrong input by the user, network failure etc.

There are four keywords that are used for handling the exception in Java.

Answer: Immutable classes are part of the Java classes whose object is once created, it cannot be modified. If any modification is done in the immutable object then it creates a new object. In Java, the string is immutable. Usually Immutable are final in Java but by the use of the overriding method, immutability can be compromised.

Answer: The process of converting Java object into a stream is called serialization. Once the object is converted into a stream then it is saved as a file or can be sent over the network or used in socket connections. The serializable interface should be implemented by the object and we can use java.io.ObjectOutputStream for writing the object to file or to any OutputStream.

The process converting back a stream of data into the object is known as the deserialization.

18. How does HashMap work in Java?

Answer: HashMap is used to store key-value pair in Map. In this entry, statically nested class implementation is done. HashMap works on the hashing algorithm where hashcode() and equals() methods input and get methods. When put method is called by passing key-value pair then HashMap uses hashcode with hashing to find out the index to store the key-value pair. The LinkedList is used to store the entry value and if there is already some value stored then equals() method used to check it with the existing entry. If it matches with existing entry then it overwrites it and creates a new entry.

When the get method is called by passing key then again it uses hashcode() to find the index in the array and use equals() method to find the correct entry and return the value.

19. What is object cloning?

Answer: Object cloning is the process of creating an exact copy of the original object. A class supports cloning when its implement Java.lang package. Cloneable interface and override clone() method from object class is used. Clone() method syntax is as following:

If Cloneable interface is not supported by the Object class then it throws exception ‘CloneNotSupportedException’.

Answer: The Big-O notation tells the performance of an algorithm in terms of the number of elements in a data structure.  It is a language which generally tells about how long it takes to run the algorithm. In this, we compare the efficiency of different approaches to a problem.

Generally, it’s like math; not the boring one but awesome one where you can focus on the things which are really happening.

Certifications also play an important role to make you stand out from the crowd in the interview. So, it is recommended to get a recognition of your knowledge with any Java certification. Whizlabs helps you prepare for the Oracle Java certifications with online courses and practice tests that you can check.

Become an Oracle Certified Java Professional and get ready for the interview with these top Core Java Interview Questions, and all done. Join us now to get your dream job.