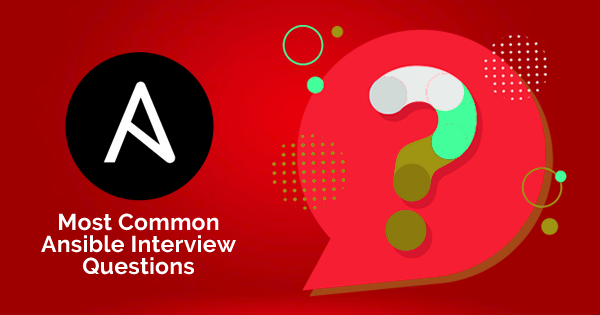 When it comes to software development, automation plays a significant role. Most of the developers are now trying to automate the development process and production environment. This is where Ansible comes into the role, and it increases the value of an Ansible certification. It makes configuration and automation management a lot easier than before.

This tool works on Python and uses SSH to setup, deploy, and manage a project. Besides, it is used to manage IT infrastructure. In general, Ansible helps in task automation, application or software deployment, and configuration management. It only works through PowerShell, SSH, and APIs.

1. What do you mean by Ansible and why it is different from other DevOps tools?

Answer: This is one of the most common ansible interview questions. To answer this question, you can say like, Ansible is a software automation tool. Besides, it is also a great IT Configuration management tool. In general, it works on Python language and deploys applications through SSH. The primary purpose of the tool is to enhance productivity by resolving various automation challenges.

Its features have made it different from others which are:

You can learn more about ansible to answer this kind of basic ansible interview questions.

There are a number of DevOps tools that are popular among the DevOps professionals. Have a look at our list of Top DevOps Tools and learn about them to have a bright DevOps career.

2. How does Ansible work?

Answer: In short, Ansible works under two different types of servers. One is Nodes, and another one is the controlling machine. Talking more about them, controlling machine is the platform where Ansible is installed. On the other side, controlling machines control the Nodes through SSH. Besides, the inventory file holds the node’s location. The tool deploys the modules on a node by initiating the playbook. As it is agentless, you don’t need to use any other tool to control the process. Such ansible interview questions are quite important, and you should clearly explain the process.

3. What do you mean by continuous delivery?

Answer: It is the process of delivering the application as soon as its development work completes. Furthermore, here you can use versioning control system. You can keep track of the process in real-time.

4. Why should one learn Ansible?

Answer: If you see, you will find it more than just a tool for the servers. Ansible also plays a great role in networking. If you search, you can find different support for networking devices. However, ansible gives a clear view of the environment. Besides, it lets you know how it works in the process of network automation. It makes the automation process much more straightforward and getting popular among developers.

5. Can you tell about server requirements for Ansible?

Answer: Well, if one is using Windows, then he/she will need a virtual machine with Linux. Because Ansible requires Python. Besides, make sure that you are using Python 2.6 and the latest version. Always consider going through such ansible interview questions for DevOps engineers.

6. What do you mean by Ansible tower?

Answer: This is one of the most frequently asked ansible interview questions. Ansible Tower is a hub to store all the automation tasks. It works on agentless modules. Besides, it doesn’t require any local file installation to connect nodes with the controlling machine. However, until ten nodes, you can use it for free.

7. Can you tell something about Playbook?

Answer: The playbook is a process to transmit commands to systems. Besides, it comes with YAML format files. In detail, with this, one can now easily configure the environment by sending a command to different computers. So, there is no need to use Ansible commands separately to set up the computers.

8. What are the uses of Ansible?

Answer: Developers prefer to use Ansible to deploy different software applications to nodes with just a single command. It makes the configuration and automation management a lot easier than before. With a little know-how, you can carry out the task. Besides, in the field of IT industry, it helps in managing and deploying applications to remote nodes.

Preparing for a DevOps interview? Go through these top DevOps Interview Questions and get ready to ace the interview in the single go.

9. What do you mean by Ansible Galaxy?

Answer: It is one of the best ansible interview questions. Ansible galaxy, bundled with Ansible creates the effective directory structure. In general, with the command, it can easily communicate with the client. Besides, it also offers to automate configuration through the playbook.

10. Can you explain about different Ansible modules?

Answer: In detail, Ansible comes with two different modules, i.e., Extra and Core modules. All these modules are idempotent.

11. Can you explain about Ansible’s callback plugin?

It lets the users add new behaviors to Ansible, responding to the ongoing event. In general, this plugin controls all most all the outputs running in the command program. Besides, you can use this to add some more output, for the integration of different tools and more.

12. What are the Ansible variables?

Answer: When you are looking for frequently asked ansible interview questions, don’t ignore this one. You can face this question in your interview. So, Ansible variables are quite similar to variables of other programming languages. In detail, they come with value uses for computing playbooks. Besides, we can use different conditions for the variables. For example,

With this command, you can define Port_Tomcat with port number 6060. You can use this variable in the playbook.

13. How can you access shell environment variables in Ansible?

14. What are the ways to disable cowsay?

Answer: By executing playbook in Ansible, one can easily disable cowsay through any of the following ways:

15. Can you explain some differences between Puppet and Ansible?

Answer: It is one of the important question among the list of ansible interview questions. So, you need to answer it very carefully.

It is much complex than Ansible. Puppet uses Ruby language, and the tool helps in reporting and visualization. However, you will need third party software to run this tool. The best thing about this is it runs on different operating systems. However, before start using it, you need to learn the DSL language.

The tool is simple to use and easy to setup. Unlike Puppet, Ansible uses YAML language. Besides, Ansible doesn’t require an agent. With this, one can enjoy an effective and automated process. That means an increase in production and error-free delivery. However, it will not work on Windows OS and only works on Linux.

Chef vs Puppet vs Ansible

16. What are the differences between Chef and Ansible?

Answer: Try to get more information on different tools to answer this kind of ansible interview questions and answers. However, some basic differences that you can mention are:

17. What are the steps to set up or install Ansible?

Answer: You will find this question among most common ansible interview questions. However, let’s jump into the answer. In general, there are two major ways through which you can install Ansible.

18. How can you connect multiple devices in Ansible?

Answer: With the installation of Ansible, you complete the basic configuration. Besides, this will also create an inventory. This will remain as the base, and now you are ready to test the Ansible. However, if you want to connect to multiple devices, then use the feature “Ping Module.” For connection test, use Ansible – m ping all.

19. Is it possible to create own modules through Ansible?

Answer: Yes, developers are free to create their modules using Ansible. In detail, this useful open-source tool works on Python. So, if you know more about Python language programming, you can create your modules. That’s why the tool is highly customizable. Besides, it won’t take much time for creating new modules. If you want to know more about ansible interview questions, you can go through different online sources. Besides, you can take help of experts for such ansible interview questions.

20. What do you mean by Ansible Vaults and explain their uses?

Answer: You can answer this one of the best ansible interview questions in the following manner. It is a unique feature of Ansible which let you store all the file securely. In general, it encrypts the files, YMAL Playbooks, and other variables in Ansible. Besides, it offers you can get unique facility where you encrypt as well as integrate the data with the Playbook.

You can add some more information while answering such ansible interview questions. For example, it comes with five-level granularity. That means, the files can be encrypted or unencrypted. You can use one single password to encrypt and decrypt the data. Besides, Ansible Vaults are quire user-friendly.

In your DevOps interview, employers could ask you if you have used Ansible before, to know about your experience. So, give the information very honestly. Only share your experience, if you have used it before. You can tell them about the projects that require Ansible. Besides you can explain to the employers what is Ansible, how it works, about its tolls and more. Moreover, tell them about some similar tools, for example, Jenkins, Kubernetes, Docker, Git, and more.