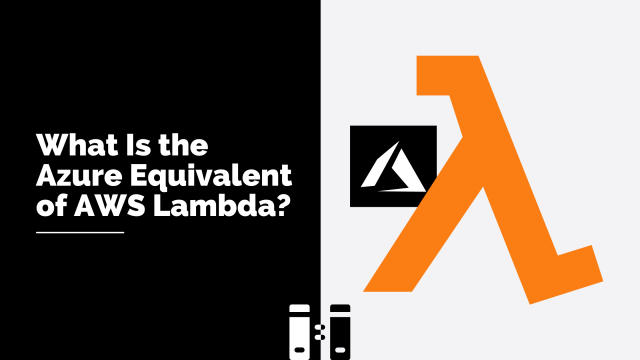 Want to learn about the Azure function that is AWS Lambda equivalent? Read on to know and dive deep into the Azure equivalent of AWS Lambda.

The most direct and relevant equivalent of AWS Lambda on Azure is Azure Automation. It is similar to that of Lambda in operations, except the only difference is in its running process. Azure Automation might not seem too much integrated as that of Lambda, but the model is somehow similar. To be clear, in both instances, you write scripts, and they are then called for execution.

AWS Lambda launched its services back in 2014, and the serverless computing model has taken over the sector since then. After that, Azure and other such cloud service providers brought in their adaptation onto FaaS. The idea behind offering the services is similar in Azure, the popular AWS Lambda equivalent, but the implementations are quite different from one another.

In this article, you will know about some of the important attributes of how is Azure equivalent of Lambda. Along with that, this article also focuses upon the differences between AWS Lambda and Azure.

What is AWS Lambda?

AWS Lambda is a proficient code-execution platform that is developed to reduce scopes of containerization. There is a specific machine architecture adapted by AWS Lambda for achieving it! Moreover, it helps you derive the individual functions within your application. The functions called within Lambda are executed upon Amazon Machine Instances. With the use of Lambda and other AWS Services, you can develop a complete application without the necessity of managing the server-side code.

Read more on What is AWS Lambda?!

Microsoft with Azure has entered the field of serverless computing. It was also offering PaaS for ages and initiated the serverless environment in the year 2016. Since then, Azure functions are considered to be the best AWS Lambda equivalent that consists of the potential to run the arbitrary codes within the temporary execution environments.

1. Languages & Platforms That They Both Support

The first thing that gives insight into the fact of Azure equivalent of AWS Lambda is the languages that they support. Azure functions and AWS Lambda support C#, Python, Node.js and others. These are just a few of the examples of languages that they support. Along with that, AWS Lambda is meant to offer additional support for some other languages such as Java and Python. Azure functions offer additional support for PHP and F# language.

But, both the serverless computing platforms run over different execution platforms. Azure Functions run within a Windows environment, and AWS Lambda runs on LINUS as it is built from Amazon Machine Instances. The language you choose is completely upon you! The development team will decide upon which language they wish to use for writing and executing the code.

The productivity of the development team is important for consideration. For the best of your knowledge, you need to know that both AWS Lambda and Azure Functions are putting in immense efforts to expand their support of language and service offerings. Therefore, it is an important consideration that states how is AWS Lambda equivalent to Azure Function attributes.

2. Function Triggers That They Both Support

Azure Functions, being the perfect AWS Lambda equivalent, offers dynamic and configurable triggers that are used for invoking the desired functions. It is a similar offering in both Lambda well as Azure! Under AWS Lambda, these function triggers are sent from different services of AWS. Moreover, you can also configure the API trigger with the use of API gateway, DynamoDB, Amazon S3 and others.

Azure Functions gives out quite similar triggers as that of AWS Lambda and offers access through the web API, and invokes the functions in a fixed schedule. The triggers within Azure are also provided from other respective resources such Azure Event Hubs, Azure Storage, and others.

Differences Between Azure and Lambda

Even though there is some similarity between these two serverless computing services, there is a lot of functionality differences that make them distinct from one another. In case you are a beginner in these computing environments, then you might be facing difficulties in terms of choosing the right one for your needs. Therefore, even though Azure is considered as AWS Lambda equivalent, there are some differences that explain the varying functionalities between them but have nothing to do with the end result, as they remain the same!

The hosting plans and ideology are different in both cases. There is only one single way of deploying the function within AWS Lambda for running it. It explains the strategy of Amazon to ensure that all the customer scenarios are covered with this approach. AWS Lambda intends to cover the customers who wish to develop or manage their hobby websites or develop an entire enterprise-grade system for data processing.

Azure Function has a different approach as compared to AWS Lambda. It separates the notion embedded within the Azure Functions model of the program from the serverless model. Therefore, it helps you to pay only according to the usability within its hosting plan. It comes with a fully managed plan of consumption for the users. There are different hosting options with Azure to serve select purposes.

AWS Lambda consists of a straightforward programming model under which the function receives a JSON object which will be the input. The output will also be in JSON format. The type of event is what defines the scope or schema of the objects. These objects within AWS Lambda is defined and documented in the SDK Language.

Azure Functions has a more signified model that is completely based upon bindings and triggers. The trigger within Azure is considered as an event to which the function responds. A single function consists of several outputs and input bindings for pulling out or pushing in additional data during the processing instance.

To give this explanation a bit more clarity, for instance, an HTTP triggered Azure function can process and read a document within Azure Cosmos DB and collectively send a queue message. The binding configuration is what helps get it done within the Azure programming model.

The serverless functions are customizable, and that is what makes them so useful for building diverse applications. Azure Function, being the best AWS Lambda equivalent, has enabled open binding extensions within it. It is for allowing the community to create new bindings and implement them into the Function apps.

In the meanwhile, AWS Lambda defines its various concepts of layers. It is better defined as the mechanism of libraries that comes with custom runtimes. AWS Lambda has implemented such concepts to offer support for other languages and their associated dependencies.

While deploying AWS Lambda function, the configuration demanded by the service platform is the maximum memory allocation that is supposed to be between 128 MB and 3 GB. Along with that, the running cost and the CPU Power is proportional to that of allocated memory. By considering the workload profile, you need to determine the optimal size of the instances. Irrespective of size, all functions can seamlessly run over AWS Lambda.

Azure Function comes with a consumption plan and has adopted the concept of ‘one-size-fits-all’. The maximum memory within the Azure function is 1.5GB and also comes with a virtual core. The azure function allows you to choose between Linux and Windows as their hosting OS. But, there is a premium plan within Azure that comes with 14GB memory and four virtual cores. To avail of it, one will have to pay a fixed per-hour charge.

These are the ideal differences and similarities between Microsoft Azure and AWS Lambda. Both Amazon and Microsoft are big names within the cloud service market. AWS Lambda has been in play long before Azure came into the play. But, Azure seemed to have coped up with the factual implementations of AWS and is a strong AWS Lambda equivalent in the present era.

The beginners out there who are new to both the concepts must analyze these differences and similarities to find the one that meets their suitability. With perfect analysis and choice, you will eventually find it convenient to reach the end results without much hassle. Leave it upon your developer team to assess their productivity upon the detailed attributes of both Lambda and Azure before choosing one. How to prepare for Microsoft Information Protection Administrator SC-400 exam?