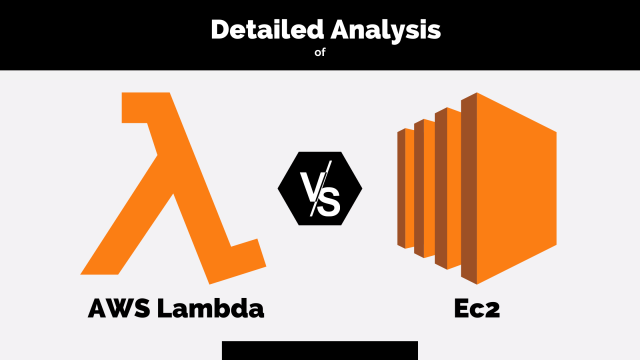 Amazon has proved its might in the field of offering diverse cloud services and has excelled in almost all scenarios to date. Amazon EC2 is considerably one of the most popular services brought up by Amazon. Moreover, it is considered one of the major parts of the cloud computing scenario of Amazon.

Amazon EC2 came into play in 2006 and has gained immense popularity since then. But, along with that, AWS Lambda is also a popular service that came out in 2014 and is now walking side-to-side with EC2 in terms of popularity and adaptation.

Read more about What is AWS Lambda today!

Therefore, to help you understand the potential of both of these services offered by Amazon, here are some of the important differences upon AWS Lambda vs EC2 for you to consider that will help you make the right decision upon picking one amongst these two.

Before starting with the differences between AWS Lambda and Amazon EC2, it is better to get a brief idea of the definitions of these two services by Amazon.

AWS EC2 (Amazon Web Services Elastic Compute Cloud) is a popular service that uses EC2 instances or virtual machines within the cloud. It allows you to change the disk space, enhance CPU performance and tweak memory a swell.

AWS Lambda is a popular computing service platform that allows users to execute defined code that is written in a Lambda understandable language that is Python, JavaScript, or Java. Under AWS Lambda, you do not need to configure any special virtual server or environment for running the application that is coded. 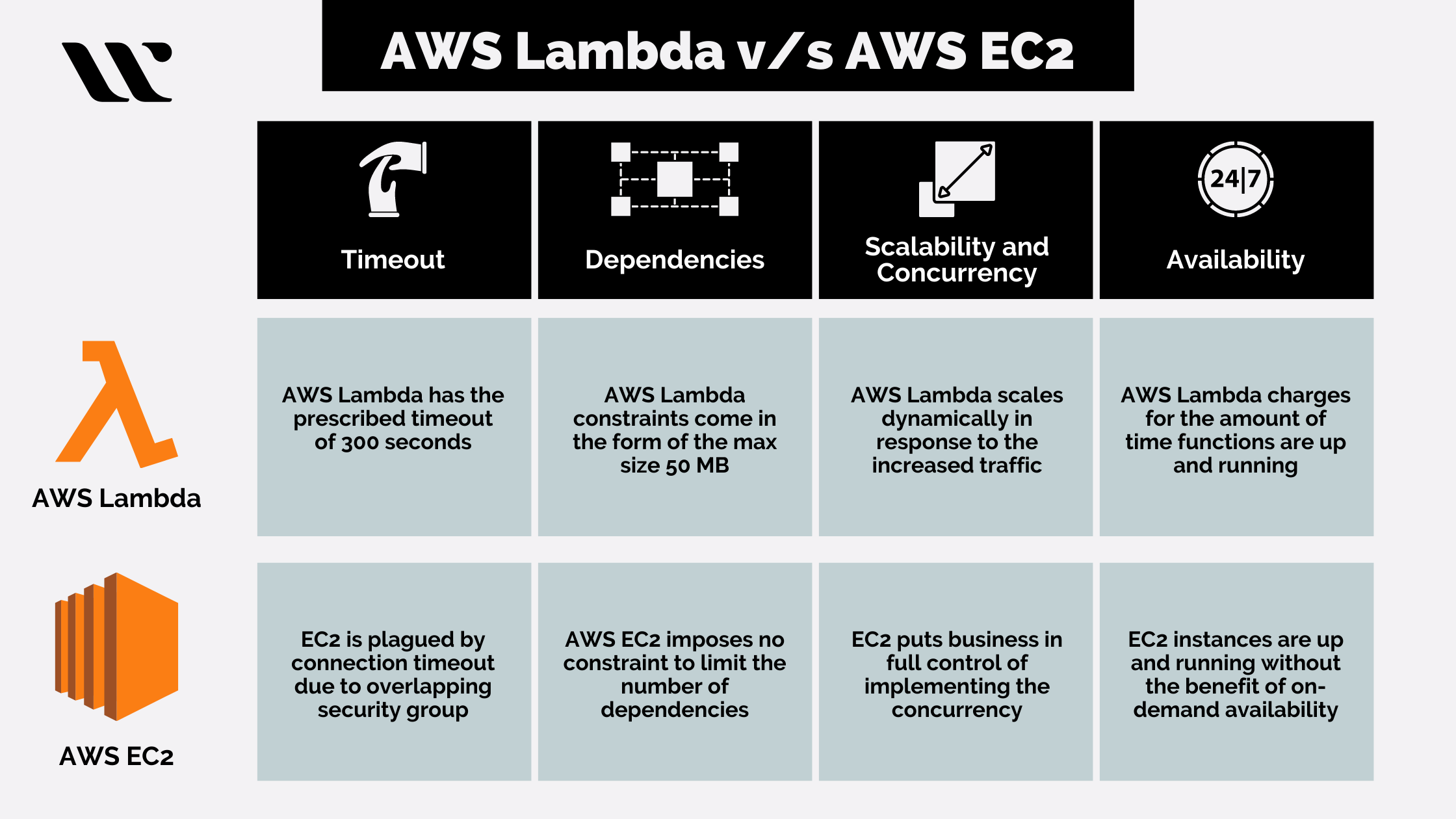 Both AWS EC2 and AWS Lambda have their own significance in different comparison criteria. By using these two services, you can configure almost everything. This section is dedicated to the important comparison elements in Lambda vs. EC2 battle that are as follows:

Under the AWS Lambda vs. EC2 scenario, both have different uses that state their significance in different sectors. The use cases of Amazon EC2 are:

The use cases of AWS Lambda are different from that of EC2 and serve the users in a distinct manner than the way EC2 does:

As the use cases, the working principle is also different when AWS EC2 vs Lambda is considered. Under EC2, the operations are done with VMs that are also known as the EC2 instances. Along with that, it allows you to add virtual hardware such as network interfaces, memory, virtual disks, and others to the instances. Along with that, you can also add start, stop & reboot functions to the instances. AWS EC2 is proficient in working with both S3 Buckets and Elastic Block Storage.

Here we bring a comprehensive AWS Lambda tutorial that will make you a pro in AWS Lambda.

AWS Lambda runs your application within a container that consists of libraries and codes. The resources needed for the execution are provided by Amazon, and the scaling is done automatically. You do not have the authority to control the running instance of EC2 and the running container of AWs Lambda. AWS Lambda is a function that gets executed from the trigger queries. Some of the common triggers of AWS Lambda are Alexa Skills Set, API Gateway, CloudFront, Kinesis, S3, SQS, SNS, CodeCommit, and others.

Under EC2, there is a complex snapshot system available for the Elastic Block Storage of respective EC2 instances. With it, you have the accessibility to create diverse incremental snapshots and then turn around to the needed EC2 instance state. It also allows the users to use multi-volume snapshots with the intention of handling the high-end workloads.

AWS Lambda is embedded within a versioning system for enhanced management of the Lambda functions. Every code copy can be assigned a specific version number, following to which the aliases will be pointed to the respective versions of code. The numbering of such code versions commenced with the count of 1 and increments gradually.

An Amazon Resource Name is assigned to every version of the Lambda function.

In this AWS Lambda vs. EC2 battle, this differentiation point is of utmost importance. It is so because performance is what will define the importance of each one of these Amazon services.

Under EC2, the instance runs continuously after it is powered until the time you stop it manually. If not that, then you will have to initiate a task specifying the shutdown protocol for stopping the running of that instance. If the performance aspects of a particular EC2 instance permit, you can run several applications upon it simultaneously. If your applications are meant to be run throughout the day, then EC2 instances can be considered as a worthy solution.

AWS Lambda is quite available at all times but is not meant to run throughout the day. You will find the Lambda function inactive when it is in the default state. It activates only when a query of the trigger is linked to a particular event. The application or Lambda function has a maximum timeout limit of 15 minutes or 900 seconds. If you intend to run some long-running applications, then AWS Lambda might not be the best bet for the same.

For running the applications that need a run-time of more than 900 seconds or have a variable time of execution, prefer using AWS EC2 for the purpose.

With EC2, you will have to manually configure a firewall to control the security aspects of your EC2 instances. Amazon is offering a Virtual Private Cloud for ensuring cloud security to the instances and maintains traffic control. You are requested to manually add and configure antivirus to the EC2 instances. Along with that, you can also specify permissions, create the specified IAM roles, initiate dedicated security groups, and others for added security.

Read more on When Should You Use AWS Lambda!

There are certain permissions to access select AWS services, and Lambda has that access by default. IAM Role is implemented for defining the services that are available for the function. For each function, the IAM role should be configured accordingly. Once you have successfully configured the IAM role, you can easily connect the Lambda function to select Amazon services without the need for any special authorizations.

There is a possibility of encryption within a lambda function and S3 bucket or Lambda and API gateway. The default encryption is initiated every time a lambda function is created. Security is better with AWS Lambda in comparison with Amazon EC2 as it does not need any patches or security updates over time. Hence, under this Lambda vs EC comparison element, AWS Lambda took an extra point!

These are a few of the practical differences that explain the importance of both AWS Lambda and AWS EC2. Therefore, you cannot give a verdict upon who won in the battle of AWS Lambda vs EC2 as both have some flaws and superiorities over one another. Both are best and commendable in their own ways. Therefore, consider the differences and analyze which service is best for you to run your functions or applications seamlessly.