We are publishing series of articles on PMP topics to help the PMP exam preparation. One of the critical and most important concept in preparing for the PMP exam is Quality Management tools. In this article we are going to explain you top 7 tools for quality management.

Monitoring and Controlling Quality ensures that Project and process are on track and are progressing as per the baseline estimations and requirements. To perform quality control we use various tools and techniques like Inspection and Statistical Sampling. While Inspection refers to ensuring if the product confirms to specified requirements, Statistical Sampling focuses on quantitative analysis of a sample of data to ensure conformance to the target measurements.

Besides these tools, there are other seven tools which are collectively called ‘Seven Basic Tools of Quality’.  The primary purpose of each of these tools is to examine the product, service or result as well as the project processes for conformity to quantitative standards.

The list of ‘Seven Basic Tools of Quality’ includes:

Diagrams that define the inputs to a process or product to identify the potential causes of defects are known as Cause and effect diagrams. (Std. Def.)

This diagram is also referred to as Fish-bone analysis diagram or Ishikawa diagram. Kaoru Ishikawa was a significant contributor in the realm of Quality. They are used to determine what may have caused a defect. They are very helpful when we need to analyze the root cause of a problem.

For example, referring to diagram 1, we can see that there could be a problem of project going over budget during the course of its execution. The given diagram illustration simply helps us list out the possible causes of the cost over-run. Once the root cause is determined, it could be handled with appropriate resolution and may help in damage control. It could help the project manager save some cost during the future phases of the project.

A Control Chart is a graphical display of data over time and against established control limits that has a center line that assists in detecting a trend of plotted values toward either control limits. (Std. Def.)

To explain it in a simple way, Control Charts are a way of visualizing how processes are doing overtime.  Control Charts measure the results of processes over time and display the result in graph form to show whether the process variance is in control or out of control. 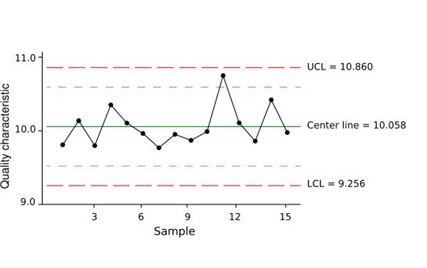 For example, referring to diagram 2.0, let’s say that the acceptable quality characteristic of a component measures 10.0 on an assembly line product manufacturing unit (The metrics of a process are generated after quantifying a process through Key Performance Indicators and also from Historical data.).  The chart above shows control limits as dashed lines. The mean is the solid line in the middle.  By looking at the chart above, you can see that there are a lot of data points which fall above and below the mean, but they are well within control limits. However, when a data point falls outside of the control limits, we would say that data point is out of control and a corrective action is needed to be taken to control the process.

It’s pretty normal to have your data fluctuate from sample to sample. But when seven data points in a row fall on one side of the mean, we say that the entire process is out of control. It is also called ‘Rule of Seven’.  The ‘Rule of Seven’ states that seven data points trending in one direction up or down, or falling on any one side of the mean indicates that the process isn’t random.

The depiction in a diagram format of the inputs, process actions, and outputs of one or more processes within a system is called a Flow Chart. (Std. Def.)

Flowcharts let you show how processes work visually. You can use a flowchart to show how the tasks in your project interrelate and what they depend on. 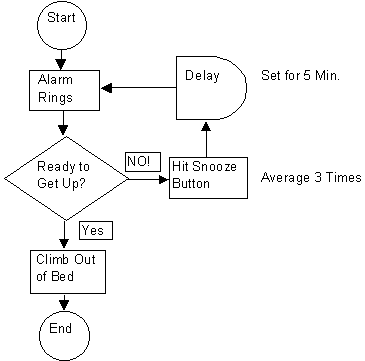 They are also good for showing decision- making processes.

Flow charts are good way to analyze where in the process could the problems occur.

For example, referring to diagram 3.0 on the right shows a small process of descision making to get out of the bed and what would happen if we choose not to. If we decide not to get up, how would the process react and what will be the possible outcomes, until we decide to really get out of the bed.

The flowchart helps you to see how all of the phases relate to each other. Flowcharts help us get a hold on the way we are working by showing us a picture of the whole process.  In other words, flowcharts are diagrams that show the logical steps to be carried out in order to accomplish an objective.

A bar chart showing a distribution of variables over time, is called a Histogram. (Std. Def.)

Histograms  give us a fair idea of how our data breaks down. It shows the distribution of  data over various streams ranging from resource allocation to budget distribution.

For example, referring to diagram 4.0, if we found out that our product has 75 defects, we may still need a clear idea of there severity. We cannot assume if they were all critical. So looking at a chart like the one below would help us get some perspective on the data. A lot of the bugs are high, medium or low priority. It looks like only 10 or so are critical. Histograms are great for helping you to compare characteristics of data and make more informed decisions. This product probably isn’t ready to be delivered yet as it still has alot of high severity bugs, but at least we know that the bugs arent all critical! 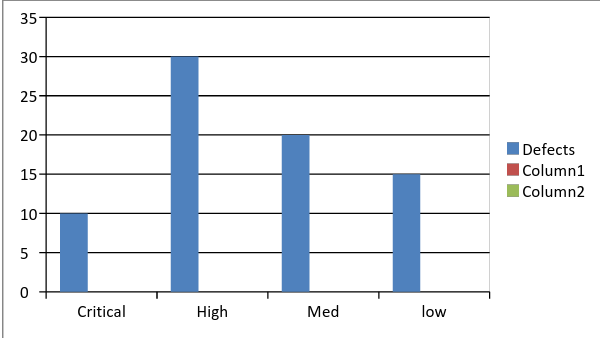 A bar chart ordered by the frequency of occurrence, that shows how many results were generate by each identified. (Std. Def.)

Pareto Analysis is a statistical technique used in selection of a limited number of tasks that produce significant overall effect. Pareto charts help us to figure out which problems need our attention right away. They’re based on the idea that a large number of problems are caused by a small number of causes which is based on the Pareto Principle.

For example, refering to diagram 5.0, the Pareto charts plot out the frequency of product faults and sorted in descending order. This particular Pareto chart divides problem areas into seven categories, which are always  ordered from most to least faults found. The right axis on the chart shows the cumulative percentage. We observe that most of the product problems are caused by installation issues. So, improving the way products are installed could be one of the ways to resolving 40% issues besides taking care of the Software faults and shipping faults, to prevent failure of the product in the market.

It clearly shows that only these three categories combined account for causing 79% of faults in the product. 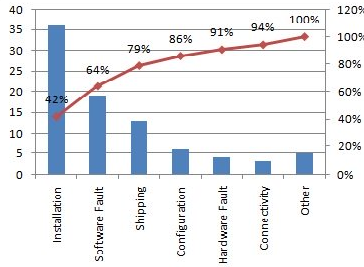 A run chart is a line graph of data plotted over time used to show trends in the variation of a process. (Std. Def.)

Run charts are often used in conjunction with Control charts. By collecting and charting data over time, we can find trends or patterns in the process. Because they do not use control limits, run charts cannot tell you if a process is stable.

Run charts tell you about trends in your project by showing you what your data looks like as a line chart. If the line in the chart were the number of defects found in your product through each quality activity, that would tell you that things were getting worse as your project progressed. In a run chart, you are looking for trends in the data over time. You could check the chart to see if it seem to be going up or down as the project progresses.

For example, referring to diagram 6.0 below, as the given software development project progressed, we observed that the trend of fixing the bugs was slower in the initial phase of software testing. However, as more and more bugs were generated by the tester, the developers started focusing on fixing more bugs to ensure delivery on-time and on-budget.

‘Trend Analysis’ is another technique which is supported by Run Charts.  If we have historical data and current data, by using mathematical statistics of business intelligence, we could predict the future outcomes and a representation could be made using Run Charts. 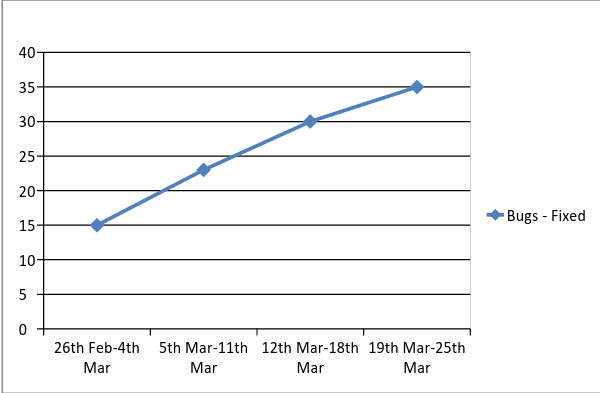 A scatter diagram, or scatter graph is a graphical representation of quantitative analysis on mathematical statistics of two variables, using Cartesian coordinates.

Scatter diagrams show how two different types of data could relate to each other and show the progress of work.  Scatter diagrams use two variables, one called an ‘independent variable’, which is an input and the other called the ‘dependent variable’, which is an output. This relationship is also analyzed to prove or disapprove cause and effects relationship between the variable.

The result shows a positive correlation between the variables. 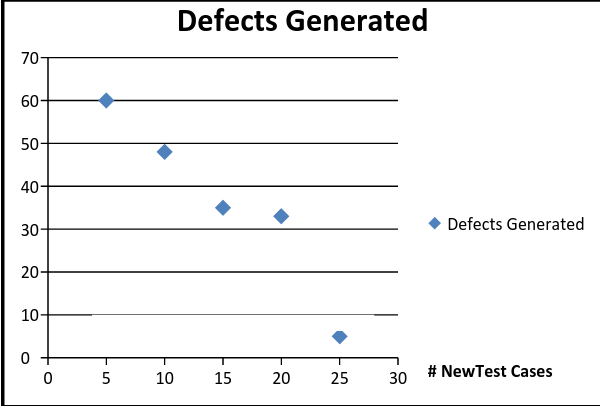 If you are looking for any help in preparing for the PMP certification exam, please call too our customer support or send a mail.