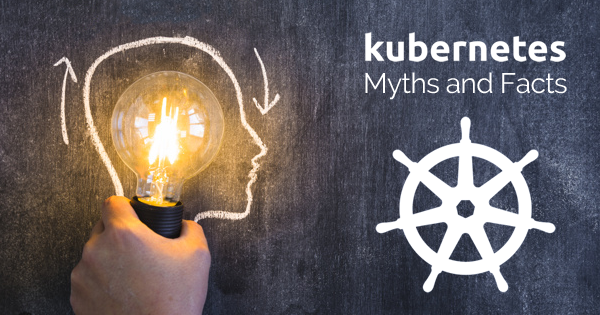 The last 20 years have seen a series of development in IT infrastructure. Virtualization brought hardware abstraction, private cloud gave us flexibility with lowered costs, while containers kept adding to the stack of optimum solutions. Over the past few years, Kubernetes has taken over the technological arena by storm.

Kubernetes provides an open-source platform for managing containerized applications spread across multiple hosts. It also gives a basic platform for deployment, maintenance, and scaling of the applications. But as technology or platform grows, a number of misconceptions arise as a result of improper knowledge and self-created views. In this article, we’ll highlight some of the Kubernetes myths and the facts behind them.

Wide Spread Kubernetes Myths and Facts Behind Them

Kubernetes is witnessing a rising trend with the efficiency and ease that is provided by the containers. But, with the advantages, a trail of Kubernetes myths follow along. Let us debunk a few common misconceptions about Kubernetes:

Myth 1: Running Kubernetes in dev/test gave you a firm handle on your operational needs.

Fact: There are plenty of differences between Kubernetes in test/dev stage versus Kubernetes in production. Many professionals have categorized the difference by giving a parallel. Here they compare dev/test with production to the difference between agility and then agility paired with performance and reliability. The latter combo certainly requires much more efforts. The dev team focuses entirely on the app agility in developing and testing the new apps and codes.

Whereas, the IT Ops focus on scale, performance, and reliability of the apps. For production, the platform must be tried and trusted, robust, and enterprise-class. Automation becomes an essential requirement for running Kubernetes or containers. Therefore, the production clusters must be installing using automation only. Versioning is also important for production operations.

So, the fact is that running Kubernetes in test environment only lets you take some shortcuts.

Myth 2: You have got reliability and security all figured out.

Fact: Another one of the predominant Kubernetes myths is that it provides security and reliability. In the production environment, more focus is given on scalability, performance, high availability and security. Therefore, it is essential to plan for production requirements during the architecture phase. Kubernetes have open connections as the default setting. But when it moves to production, the downtime and the wider attack surface poses greater business risks.

A lot of work is involved in building secure and reliable systems when the shifting of containers and microservices are concerned. Orchestration is also helpful in achieving it. Limiting the attack surface by locking down the Kubernetes might also require a lot of work. Hence, it is essential to choose a least-privilege model with policy enforcement and to limit the communications paths to only the services that are needed.

So, It might not be true if you are only in a non-production environment. It needs proper planning and architecture.

Fact: While we are discussing Kubernetes myths and facts, an important one arises about scaling. Running at scale can change everything. The volume of data that is produced is much more extensive, and the monitoring needs must scale with the data. Although the interfaces of all the components of Kubernetes cannot be realized until you run in production. The Dev or test environments also make it seem straightforward. It is easy to skip some basics in the test.

However, the failure in production will certainly ruin the day. To exemplify, scaling a cluster up or down can be a good example of a task that seems easy at first locally, but becomes challenging in a production environment. Therefore, it is essential to plan and understand the needs before the scaling decision. Most importantly, it must be tested to withstand higher loads.

So, It is wrong to think that orchestration can make scaling easy.

Aspired to learn the basics of Kubernetes? Check out our previous article which covers an introduction to Kubernetes.

Fact: A very common misconception about Kubernetes is that if it is running locally, it can work in production anywhere. While the Kubernetes can provide effective, consistent environments, there can still be drastic differences between the vendors. Deployment in production requires the components that are not present locally, like logging, monitoring, credentials, and certificate management. This issue can significantly widen the gap between dev/test and the production environments.

There also exists an area where it’s not only the Kubernetes consideration but containers as well. A container that is running smoothly in the lab might fail to run, or not run safely, in a cloud environment that has a different set of tools.

So, it is important to understand that there are differences between running Kubernetes on the developer’s laptop and a production server. Similarly, there can be differences across environments as well.

Myth 5: Kubernetes is only for public cloud.

Fact: Kubernetes is a native cloud platform, in a sense that it is designed to take advantage of the architecture of cloud computing. It provides support scale and resilience for the distributed applications. Although, the native cloud is not completely synonymous with the term public cloud.

Kubernetes can easily run on different platforms, be it a personal laptop, rack of bare metal servers, VM, or private/public cloud environment. It allows you to cluster together a group of Linux containers, and it can effectively and easily run these containers. The clusters can span hosts across private, public, or even hybrid clouds.

So, the fact is that Kubernetes is commonly referred to as cloud technology. It was previously called as Cloud Native Computing Foundation. It allows both public and private containers.

Myth 6: Kubernetes is a finished product.

Fact: Kubernetes facts are always questioned and widely discussed. One such fact is pertaining to the fact that if Kubernetes is a finished product. In reality, Kubernetes is merely an open-source project and not a product. It is essential to understand that Kubernetes is an ecosystem, that moves very fast. Many professionals also go on to calling it the fastest moving project, in the entire open source history. Things here can change in the blink of an eye.

There is a very active and fast-paced community that develops Kubernetes and products related to it. The way one needs to look at things, and also develop them also evolves. There are so many things going on, but certainly for the better.

You should know that Kubernetes is not even a product, rather it’s a project. So, no, we cannot call it a finished product.

Myth 7: Kubernetes is very simple to run out of the box.

Fact: Most of the professionals do not realize that understanding Kubernetes is not as easy as they think. It has become the key reason for the commercial growth of Kubernetes platforms. Many organizations are yet to understand this fact. They are drawn in by the table stakes necessity of using container management or the potential offered by Kubernetes. What makes it different and unique is the fact that Kubernetes is a very powerful and popular platform. The DIY mindset that is carried is misguided.

It can be easy to get Kubernetes running on a local machine. However, moving on from there, it can get really complex.

Myth 8: Kubernetes is an all-encompassing framework for applications.

Fact: While discussing Kubernetes myths and facts, another major thing that comes up is this. Kubernetes itself is a platform that lets you manage the containerized workloads and services with independent processes. It is upon the developer to define how the applications are orchestrated on the platform.

So, the truth is that Kubernetes, by itself, does not provide any primitives for apps like middleware, databases, and storage among many others.

Myth 9: It secures your containers.

Fact: It is one of the most common Kubernetes facts that it provides the safety of containers. You should note that Kubernetes does have critical capabilities to manage the security of containers. But, it is not itself a security platform. Kubernetes has a plethora of powerful controls built in that ensures network policy enforcement. It adds layers on top of the Kubernetes or gets back to leverage the right tools, to make the security features more consumable.

Myth 10: Containers are isolated from the host OS and the rest of the containers.

It must be noted that not all parts of a Linux Kernel are container-aware. Many are still shared among all the containers running on a particular host. So, it is important to know that containers can bring isolation to those who wish to use it. Although, there are some parts of the host operating system that are shared with the host and other containers as well.

Plenty of Kubernetes myths and facts are floating around in the technology domain. It is an advancement that is revolutionizing cloud technology through containers. To make the most of it, it is essential to debunk the misconceptions and rely solely on facts about Kubernetes. This article would have surely helped you to know the myths about Kubernetes and understand the actual facts behind them.

If you are new to Kubernetes and want to learn it, we’d recommend you to go through our Kubernetes training course. This course covers the basic Kubernetes concepts as well as how to implement Kubernetes with AWS and Docker. So, enroll for the Kubernetes online course now and become a Kubernetes expert!