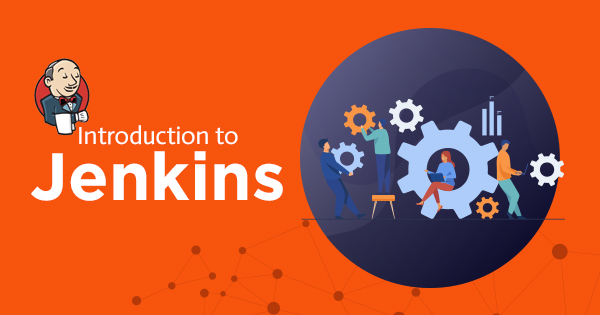 Planning to learn Jenkins to enhance your DevOps career? If so, this Jenkins introduction is for you, that will familiarize you with the Jenkins as a continuous integration tool.

The increasing demand for automation in almost every sector is clearly evident. Most important of all, the impact of automation in the app development industry has been exceptional. Organizations need competent in-house teams for delivering highly efficient programs, utilities, and apps.

Therefore, DevOps professionals are presently the best pick for software development, and expertise in popular DevOps tools such as Jenkins improves the credibility of their resume. The following discussion would present a Jenkins introduction and detailed insights into its architecture and the use of its pipelines.

Furthermore, the following discussion would also reflect on the use of Jenkins for continuous integration. The primary objective of the following discussion is to provide basic details on Jenkins to help you understand its importance in the current scenario. The objective of DevOps tools is the faster development and delivery of custom, high-quality applications. By the end of this discussion, you would be able to know exactly how mastering Jenkins can help you foster your career as a developer or test automation engineer.

Every Jenkins introduction starts with its definition before moving forward. However, for a change, let’s look into the root cause for which Jenkins came into existence. Obtaining immediate feedback from new code is very crucial in application development. Faster feedback from code can help in faster resolution of problems and prevent them from entering into production.

The most common approach to obtain feedback is through testing after new code, leading to many other issues. During the compilation of code and running of tests, developers have to wait for the tests to finish. Furthermore, development machines have differences that can lead to the development of inconsistent builds and haphazard test results. This is where the role of Jenkins in DevOps becomes clearly evident.

The Community version of Jenkins is open source and completely free. Information about Jenkins is easily available through Jenkins documentation because it is an open-source tool. Furthermore, organizations have the benefit of increasing the speed of their software development process by implementing automation. Jenkins provides integration of various processes in the development lifecycle, such as building, documentation, testing, staging, packaging, deployment, and others.

The plugins in Jenkins help in the integration of different DevOps stages. Jenkins introduction also shows some other advantages of Jenkins, such as the ease and simplicity of installation. In addition, Jenkins is written in Java, and so, it becomes portable with all major platforms.

The next important concern in a Jenkins introduction refers to its architecture. Since Jenkins is used for continuous integration, it is installed as a server. The standalone server model, however, did not work for Jenkins as it was not able to address certain requirements. For example, a single Jenkins server could not provide different environments for testing your builds.

Furthermore, a single Jenkins server could not handle the complete load in case of building larger projects regularly. Therefore, Jenkins follows a distributed architecture. The Master-Slave architecture in Jenkins helps in the effective management of distributed builds. The communication between the Master and the Slave node happens through TCP/IP protocol. Let us reflect further on the details of the components in the architecture of Jenkins.

The Jenkins Master is the main Jenkins server. It is responsible for scheduling the build jobs and dispatching builds to the slaves for actual execution. The Jenkins Master also monitors the slaves by either taking them online or offline according to the requirements. It can also help in recording and presentation of build results. Furthermore, the Master instance can also help in the direct execution of build jobs.

The next important element in Jenkins architecture is the Jenkins Slave. It is a Java executable running on a remote machine that hears requests from the Jenkins Master Instance. Users can run slaves on a wide range of other operating systems, and they execute the build jobs sent by the Master. Jenkins enables configuration of a project for always running on a specific Slave machine or a specific type of Slave machine.

The working of the Jenkins architecture can also provide further clarity in this Jenkins introduction. Let us assume an example of using Jenkins in different environments such as Windows, Ubuntu, Mac, and others. Jenkins provides multiple Slaves for providing different testing environments for builds in different operating systems. It also checks the Git repository frequently for identifying any modifications in the source code. Jenkins Master can request the different Slaves for performing test reports in the unique test environments and generating test reports.

The role of Jenkins in DevOps is primarily due to the pipeline-as-code concept followed by Jenkins. Jenkins pipeline actually refers to the collection of plugins that help in the implementation and integration of continuous delivery pipelines in Jenkins. Actually, the continuous delivery pipeline is an automated process for obtaining software from version control to users and customers.

Jenkins Pipeline helps in accessing tools for modeling of delivery pipelines as a code written into a text file known as Jenkinsfile. The Jenkinsfile is checked in the source control repository of a project. The use of a Jenkinsfile and its benefits are major additions in almost every Jenkins tutorial. Jenkinsfile creates a pipeline build process automatically for all pull requests and branches alongside providing an audit trail for the pipeline.

In addition, users can also review the Single source of truth, and multiple members of the project can edit it. Subsequently, Jenkinsfile also provides an effective review or iteration of the code on the pipeline. Another important aspect that you should know about Jenkinsfile from this Jenkins introduction is that defining the pipeline in the Jenkinsfile is the recommended best practice.

Use of Jenkins in Continuous Integration

The next crucial aspect in a Jenkins tutorial is the way it helps in continuous integration. In order to understand the benefits of Jenkins perfectly, it is important to understand continuous integration with Jenkins. For example, assume a situation where you built and deployed the complete source code of an application on the test server. However, there may be many underlying problems in this situation that might not be visible to you yet.

Let us identify the problems in Jenkins introduction further to understand how Jenkins is the best choice for continuous integration.

Therefore, developers needed a system for developers to continuously trigger a build and test process for every modification in the source code.

How does Jenkins Help in Continuous Integration?

When the developer commits code to the source code repository, the Jenkins server checks the repository regularly for any changes. The Jenkins server detects changes in the source code repository as soon as a commit occurs and then pulls the changes to start preparations for a new build. In case of the build’s failure, the related team receives a notification. In case of the build’s success, Jenkins deploys the build in the test server.

Jenkins generates feedback after testing and provides notifications about build and test results to developers. Subsequently, Jenkins continues to check the source code repository for any possible changes in the source code. If you want to learn more about how Jenkins redefines the shortcomings of the conventional software development lifecycle, then take note of the following pointers.

Before Jenkins introduction in software development, developers had to build the entire source code before testing. Developers had many difficulties in locating and resolving the bugs, thereby slowing down the delivery process. However, after Jenkins, every modification in the source code is built and tested without focusing on the entire source code. Developers don’t have to wait anymore for test results of every commit as they can get results on the run. Users have to commit changes to source code only with Jenkins as compared to the manual processes in conventional SDLC.

Preparing for a Jenkins interview? Go through these top Jenkins Interview Questions and get ready to ace the interview.

Ready to Learn More about Jenkins?

Now, you can proceed towards official training and certification in Jenkins after reading this Jenkins introduction. You might have also found some interesting Jenkins interview questions along the course of the above-mentioned discussion. The functions of Jenkins in continuous integration and its different advantages for developers and test automation engineers establish its demand in the existing job market in the tech industry.

Software development professionals can enrich the long-term opportunities for their career by enhancing their skills in Jenkins. On a concluding note, you can clearly observe that Jenkins supports a wide range of plugins that can help it in addressing the automation of different stages of the development lifecycle. So, if you want to strengthen your career prospects, then learn more about Jenkins and aim to become a Certified Jenkins Engineer.