Kubernetes and DevOps may seem inherently different. In reality, integrating Kubernetes with a DevOps environment can positively impact the continuous integration/delivery processes.

This article provides an overview of DevOps and Kubernetes, and the six factors that make them a perfect match.

DevOps was conceived as a response to the need to model development pipelines based on agile methodologies. Agile software development combines iterative and incremental models to achieve a faster delivery and adaptability. The core values involve prioritizing aspects of the process over others, as follows:

In the early days of adoption, agile teams consisted solely of developers. Later on, Quality Assurance (QA) was integrated into the process. DevOps is a step further, streamlining agile practices through the build, validation, deploy and delivery stages of the pipeline. One of the characteristics of DevOps is cross-functional teams. This ensures the full accountability of the software process from design until production.

Automation is a key part of DevOps, without which the system can’t work. Automation streamlines routine tasks that are often done manually. This enables teams to improve efficiency, security and minimizing human errors.

The Benefits DevOps Brings to the Table

In a non-DevOps environment, such as waterfall development, the development process would start with the developers writing the code for the application. Next, a separate QA team tests the code to check if it meets quality requirements. If it does, the QA team releases the code into operations to deploy. Waterfall development is an approach that involves working in stages. In this approach, every stage depends on the outputs of the previous one. There are several challenges issuing from this kind of siloed approach: 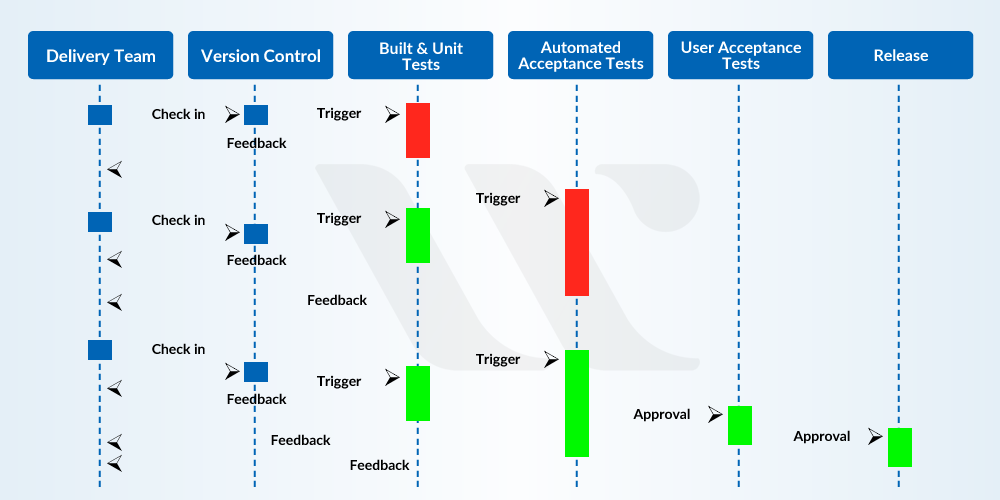 Kubernetes is an open-source container orchestration tool that automates the management and deployment of containerized software. Developed by Google, it is now under the the Cloud Native Computing Foundation. However useful, Kubernetes has a steep learning curve. Thankfully, the open-source nature of Kubernetes is driving the development of managed Kubernetes solutions that ease the adoption of the platform.

The smallest unit of computing hardware in Kubernetes is a node, representing a single machine in the cluster. It can be a physical or virtual machine.

A cluster is a group of nodes that share resources. You can use clusters to scale up and increase computing power. The cluster receives the workload, which Kubernetes then distributes into the individual nodes. When you add or remove nodes, the cluster shifts around the work as needed.

Containers are self-contained Linux execution environments. They consist of all the components a program or process needs to run. You can create containers through programming code. This supports the application of DevOps processes, such as continuous integration pipelines. Containers often contain one process per unit to ensure easier updates and diagnosis.

A pod is a structure containing one or more containers, which share the same resources and local network. Kubernetes uses the pods as the unit of replication. The platform replicates the pods to allow load balancing and build failure resistance.

Kubernetes is mostly used in large-scale organizations to perform critical tasks. Some of the Kubernetes features include:

6 Factors that Make Kubernetes a Perfect Fit for DevOps

Kubernetes helps DevOps teams by automating processes, thus minimizing the workload. For instance, you can schedule and deploy a number of containers onto a node, letting Kubernetes manage those workloads. Opting for Kubernetes can simplify the build/test/deploy pipelines.

Some of the factors that make Kubernetes a perfect match for DevOps are:

Kubernetes enables administrators to configure as code, by keeping the file in the source repository. Administrators can then describe where they want the file to go to, as well as control its versions.

This is, perhaps, the key advantage of running Kubernetes for a DevOps environment. Kubernetes enables teams to build a container image and use it everywhere you want to deploy your container. This ensures a consistent production environment. The container is exactly the same wherever it is deployed.

DevOps environments typically perform several deployments a day. That means that stopping production to deploy is not practical. You can set up a new environment and switch to it, achieving rolling updates without disrupting production.

Understanding the Role of Chatbots in DevOps